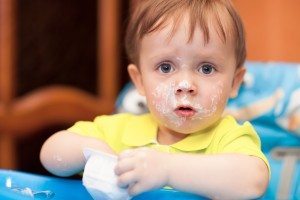 Live yoghurt is a great source of probiotics. However only two strains, Lactobacillus paracasei and Lactobacillus fermentum, have been shown to reduce eczema symptoms. Other strains of probiotics generate histamines which can aggravate eczema.

Eczema is one of those horrible conditions where there is no one treatment which works for everybody.  Annoying as it is, you will probably have to try lots of different things – ruling out particular foods, washing powders, fabric types – before you find the best way to prevent or alleviate the symptoms of eczema. That’s why it is helpful to know of all possible preventions, remedies and treatments in order to see what works (if anything) for your child.

If, like many parents, you’re constantly researching possible treatments for eczema, you’ll probably be aware of certain ‘alternative’ remedies like Aloe Vera which do seem to work for some children. Along the same lines, there has been much discussion about the potential benefit of probiotics in treating eczema.  Unlike many alternative remedies, there is ongoing scientific research into the effectiveness of probiotics in treating eczema.

Probiotics are live bacteria and yeasts which are thought to have various health benefits, including preventing and treating a range of conditions. According to NHS Choices, they are ‘usually eaten in yoghurts or taken as food supplements, and are often described as “good” or “friendly” bacteria. Probiotics are thought to help restore the natural balance of your gut bacteria when it has been disrupted.’  But, as with most ‘health’ products, the advertisers have jumped on the bandwagon and you’ve probably noticed all number of probiotics products being marketed to kids, along with optimistic sounding claims about what each can do. Despite this, it seems to be widely accepted that probiotics are helpful in treating diarrhoea, irritable bowel syndrome and a number of other gut-related problems.

Research into probiotics and eczema

A few years ago there was a study (Kukkonen, 2007, Skin and Allergy Hospital, University of Helsinki) which showed that there was some benefit in giving probiotic supplements to expectant mothers and continuing to treat the child once it was born. While helpful to people who knew their children were likely to suffer eczema in early childhood, this conclusion was of little use to the large number of us whose children developed eczema unexpectedly, or who hadn’t made the connection until eczema appeared. Further studies tried to find out whether probiotics could be beneficial if introduced after the birth,  however, the results up to now have been inconclusive.

Then in April 2015 another study (Wang, 2015) looking at babies and children taking two probiotic strains – Lactobacillus paracasei and Lactobacillus fermentum.  These were given singly or in combination and tested against a placebo in children between 0 and 18 years with moderate atopic dermatitis (eczema).  After three months, children in all the probiotics groups showed improved eczema symptoms, with the benefits remaining for a month after the child stopped taking the probiotic supplement.  There were particular improvements in the under 12s group – thought to be because intestinal microbiota may be less amenable to alteration from probiotic supplements as we get older.  However, the full age range of participants saw improvements in their eczema, including a reduction in the size of the affected area as well as less oozing, scratching, dryness and redness.  Importantly, the study included quality of life measures, with the probiotic group experiencing better sleep, reduced symptoms and more positive feels and activities affected by their skin.

This study reported: “Regarding the effectiveness of probiotics in the prevention of AD (atopic dermatitis)… infants at high risk for atopy who received probiotics developed AD significantly less frequently during the first 2 years of life than infants who received placebo.” It concluded that “More (studies) need to be conducted to elucidate whether probiotics are useful for the treatment or prevention of AD.” Some commentators have pointed out the limitations of the study, highlighting the fact that the children were not asked to change their diet which could have affected the outcome of the study. However, the is consistent with the researchers’ own conclusion that more study is needed.

However, since then a revised Cochrane review (Boyle, 2018) of the effectiveness of probiotics in treating eczema has been published. Cochrane reviews consolidate the results of all the available published and unpublished studies which meet the Cochrane requirements for robust testing. This review included the results of 39 randomised controlled trials involving 2599 randomised participants and concluded that ‘compared with no probiotic, currently available probiotic strains probably make little or no difference in improving patient‐rated eczema symptoms. Probiotics may make little or no difference in the quality of life for people with eczema nor in investigator‐rated eczema severity score (combined with participant scoring for eczema symptoms of itch and sleep loss); for the latter, the observed effect was small and of uncertain clinical significance. Therefore, the use of probiotics for the treatment of eczema is currently not evidence‐based.’

While this doesn’t sound overly encouraging, it’s worth noting another review (Huang, 2017) focusing on children suggests that probiotics may be helpful in treating eczema in children. However, these reviews also note that ‘we cannot draw robust conclusions as to which probiotic strain/mixture should be given to children with AD and which population(s) would receive maximum benefit from such treatment.’

In summary, there isn’t strong evidence supporting the use of probiotics in the treatment of eczema. However, the level of variation in the results of the various studies does seem to indicate that some strains of probiotics may be helpful for groups of eczema sufferers, particularly children.

What are probiotic supplements?

Probiotic supplements for babies and children are produced as powders or drops which can be bought online or from health food shops.  These can be either mixed with milk or food, or placed directly in your child’s mouth. From experience, the powders have a tendency to sink to the bottom of the cup. While this isn’t a problem for bottles and sippy cups, using a straw makes sure that they are actually ingested and not left at the bottom of an open cup.

When selecting a probiotic supplement for your child with eczema, remember that it’s the Lactobacillus paracasei and Lactobacillus fermentum strains which you’re looking for. These are found in a number of infant probiotic formulations. However, as with all things eczema, things are not straight-forward and some probiotic strains included in these blends may not be helpful. Initial research indicates that some probiotic strains generate histamines, which can aggravate eczema. These strains include Lactobacillus casei and Lactobacillus bulgaricus which are found in a number of infant probiotic blends, largely because they help digestion.  Here in the UK, eczema friendly L. paracasei is included in the Proven Probiotics infant range which doesn’t include either L. casei or L. bulgaricus.  Both  L. paracasei and L. fermentum are included in Aptamil formula milk, which again doesn’t include any histamine generating probiotics.

What about probiotic foods?

Probiotics are also found in certain food groups, notably dairy products. We like some of the recipes listed on the Parents website – the smoothies and yoghurt dips are both tasty and very easy to make. Please be aware that the study found benefit in treating eczema with the L. paracasei and L. fermentum probiotics strains.  Probiotic food groups may not contain these strains, or may not contain the strains in sufficient concentration, to affect eczema.  Also, many foods marketed as being high in probiotics contain high levels of histamine generating L. casei or L. bulgaricus so may aggravate eczema. These include fermented foods like aged cheese, sauerkraut and kimchi, and also chocolate, processed meats and wine (although this shouldn’t be a problem for children).

It’s worth approaching foods which are marketed as having health-giving probiotic benefits with a dose of scepticism. You only need to walk down the yoghurt and snacks aisles of any major supermarket to see a number of foods marketed to parents extolling the virtues of their probiotic contents. The Parents website makes the point that the marketing is way ahead of the science and NHS Choices warns that ‘Probiotics are regulated as foods, so don’t undergo the rigorous testing and approval process of medicines’.  NHS Choices goes on to say that this means we don’t know whether a probiotic yoghurt, supplement or tablet contains what is stated on the label, and whether the amount of ‘good’ bacteria is enough to have a beneficial effect.  “There’s likely to be a huge difference between the pharmaceutical-grade probiotics that show promise in clinical trials and the “probiotic” yoghurts and supplements sold in shops, which may not live up to the advertised claims,’ the NHS states.

We know how awful it is to stand by and watch a child suffer from eczema. That’s why it’s worth trying a range of treatments. NHS Choices states that probiotics appear to be safe and that they shouldn’t cause any unpleasant side-effects in someone with a healthy immune system. That said, the evidence supporting the use of probiotics in alleviating eczema symptoms is not strong. With that in mind, we hope to have helped you on your journey to alleviate the symptoms of your child’s eczema.

Here at ScratchSleeves, we aim to bring you trustworthy and accurate information. We collaborate with qualified dermatologists and doctors as well as drawing on peer-reviewed medical studies and our own experience as parents. All medical content is reviewed by a dermatologist or appropriate doctor prior to publication to ensure completeness, accuracy and appropriate use of medical language. Reviewer details can be found at the bottom of each reviewed post and also on our ‘Meet The Team’ page.

All scientific research referred to in our blog is found in peer-reviewed publications. All eczema related medical articles we refer to are included in the GREAT database (Global Resource of Eczema Trials) managed by the ‘Centre of Evidence Based Dermatology’ at the University of Nottingham. This database brings together information on all randomised control trials and systematic reviews of eczema treatments. Trials are identified using a highly sensitive, comprehensive search strategy that is compatible with standard Cochrane methodology. Cochrane is internationally recognised as the highest standard in evidence-based health care. Links to the publications we refer to are listed at the bottom of each article.

The original editorial information we provide is not intended to be a substitute for professional medical advice, diagnosis, or treatment. Always seek the advice of your doctor or other qualified healthcare practitioners regarding a medical condition. Never disregard professional medical advice or delay in seeking it in because of anything you have read on the ScratchSleeves blog.