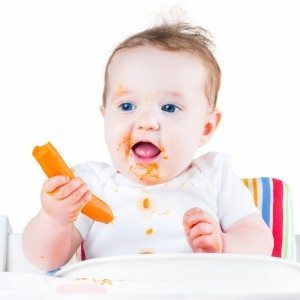 Weaning can be a messy business. See the links to our blog posts on eczema friendly laundry and stain removers

By now you’re probably only too aware that having a baby with eczema means everything is a little more complicated.  From everyday activities such as washing clothes and bathing, to the bigger challenge of weaning, you’ll need to take your child’s eczema into account every step of the way. If you’re a little daunted by the challenge of weaning an eczema baby, you’re not alone.

When it comes to weaning a baby with eczema, there are two important points to bear in mind.  Firstly, certain food types are thought to worsen the eczema, so must be introduced with caution. Secondly, a baby who has suffered with eczema in their first three to six months is more likely to have an allergy to one or more foods and symptoms can vary from mild to severe.

An awareness of the relationship between food and eczema, often referred to as an ‘atopic condition’, will help you go through the weaning process with greater confidence and less worry.

When to wean your baby

The Department of Health recommends weaning when babies are around six months of age and able to sit independently, hold their head steady and co-ordinate their eyes, hands and mouth.

However, there is some evidence to suggest that introducing solid foods between the ages of four to seven months may have a protective effect against developing food allergies, although this is unconfirmed.

Hopefully, there will be greater clarity later this year when the results of a new study ‘Enquiring About Tolerance’are made available.  It’s thought that repeated exposure of the immune system at an early age to allergenic foods may teach the body toleration so that an allergy doesn’t develop as the child gets older.

A study was carried out in 2016 called the Enquiring About Tolerance (EAT). It aimed to find out whether the early introduction from three months of age of six allergenic foods (milk, peanut, sesame, fish, egg, wheat) alongside breastfeeding could reduce the number of children who went on to develop food allergies. The authors concluded that ‘the findings of the EAT study suggest that early introduction of allergenic foods in sufficient quantity from three months of age may be able to help prevent food allergies in children.’

While the UK Government doesn’t recommend weaning before a baby is 17 weeks old, it’s not advised to leave weaning beyond six months, partly because babies need additional nutrition, but also because this may increase the risk of allergy.

If you’re breastfeeding, it’s recommended that you continue to do so while introducing solid foods.

How to introduce solid foods to a baby with eczema

If there’s a history of food allergy in your family, or if your baby already has eczema, you’ll need to be careful when you begin to introduce solid foods. The NHS recommends introducing foods that can trigger an allergic reaction one at a time and in very small amounts to help you to spot the signs. 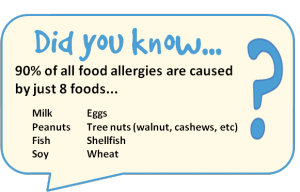 When selecting your baby’s first solid foods, it’s thought that plain cooked vegetables are the best options to start as they are the least likely to cause an allergic reaction. These include root vegetables such as carrot, swede, sweet potato and butternut squash as well as greens such as spinach, broccoli, green beans and courgette.  You can also feed pureed fruits such as apple, banana and avocado. When starting out, it’s a good idea to introduce new foods during the morning or early afternoon. This will enable you to deal with any adverse reactions during the day when your local GP surgery is open.

After a few weeks you can begin to introduce other solids, but do so one at a time and with a gap of three days in between each new food, in order to spot any reaction.  The Government recommends this second phase of weaning to include:

Once you’re comfortable with these food groups, or have identified potential problem areas, you can begin to give your baby a wider range of other fruits including citrus, kiwi and berries. You can also begin to mix the foods to increase variety – and it’s wise to keep offering allergenic foods on a regular basis, once they have been successfully introduced.

You can also introduce fresh tomatoes and strawberries, though be aware that these can cause a localised skin reaction in some children due to their acidic nature or their naturally high histamine content.  You can protect your child’s face from more acidic foods with Vaseline or emollient especially if their skin is already a little cracked or weepy.  Of course, these foods should be avoided if your child experiences an itchy rash, swelling or breathing difficulties.

By the age of 12 months, your baby should have been introduced to all the major allergenic foods, where appropriate.

What are the symptoms of an allergy?

If your child has a food allergy, you may see the signs immediately or they may be delayed.  Severe allergic reactions don’t always happen on the first contact and can build with subsequent exposures.

According to the Allergy UK website, ‘an allergy is the response of the body’s immune system to normally harmless substances, such as pollens, foods, and house dust mite.’’

Some of the most common causes of allergic reactions are:

Look out for for these allergic reactions:

Delayed reactions usually begin to show after two hours with symptoms such as loose stools or mucus/blood in stools.  Babies may also experience constipation, vomiting, gastro-oesophageal reflux, nappy rash as well as eczema as well as symptoms of anaphylaxis. Read our article on baby eczema and anaphylaxis.

A note on baby-led weaning

It’s likely you’ll hear of the term Baby-led Weaning (BLW) when you begin to explore the weaning process. Baby-led Weaning means that instead of feeding your baby with a spoon, you allow them to feed themselves with hand-held food. According to the NHS’s Start 4 Life website, baby-led weaning means offering your baby finger foods and letting them feed themselves from the start rather than spoon-feeding or pureeing foods. If this is the approach that appeals to you, you’ll still need to take extra care to ensure your child is exposed to only one new allergen at each mealtime in order to isolate the cause of a reaction.

You should be mindful that if the results of the EAT study show a benefit in introducing solid food before 6 months then some help with feeding will certainly be necessary.

Weaning is a messy business and often involves food going in all directions!  While this is a rite of passage for most parents, for those with eczema babies there are a few added complications.

You’ll have to wash their clothes more often, which means choosing your wash powder carefully, and knowing which stain removers to try.   You may also like to consider the bibs and protective clothing which will make the weaning process easier. We became particularly fond of coveralls (available from Amazon) because they’re non-scratchy and are fastened with buttons rather than Velcro.

You’ll also need to consider the stiffness of waterproof fabrics which many parents use during feeding time – the softer the better for a child with eczema.

You should be mindful that if you wish to try introducing solid food before six months then some help with feeding will certainly be necessary.

Be aware that if you have a child with eczema, they’re more likely to have a food allergy.

Take a look at the guidance on weaning offered by the NHS and Allergy UK, and talk to your health visitor or GP.

Have you already been through the weaning process?  Let us know how you got on and what advice you would offer to other parents here.

Here at ScratchSleeves, we don’t just share our experiences of bringing up an eczema child and favourite allergy-friendly recipes, we also manufacture and sell our unique stay-on scratch mitts and PJs for itchy babies, toddlers and children. We now stock sizes from 0-adult years in a range of colours. Visit our main website for more information.