Every parent whose child suffers from eczema knows how distressing it can be to watch their youngster scratch themselves raw. Many young eczema children struggle to control their itching and can end up with painful broken skin, making the condition worse and increasing the chance of infection. But being told to ‘stop scratching’ is one of the most annoying things that an eczema sufferer hears.

As a parent, it can be difficult to know what to do and how best to help your child handle the urge to itch. The discomfort of eczema is unpleasant in itself, but it can also lead to sleepless nights which make the impact worse.

In this article, we look at some of the strategies which have helped us and other parents in reducing the urge to itch. 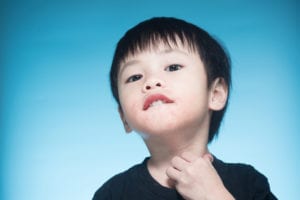 Being told to ‘stop scratching’ is one of the most annoying things you can say to an eczema sufferer.

Why does eczema make you itchy?

Roughly one in five children in the UK is affected by eczema, which makes the skin hot, dry and very itchy. The itch is generally known as the worst symptom of eczema as it is incessant and only gets worse when scratched.

Most eczema flare-ups are triggered by the ‘itch-scratch cycle’ which is when itching leads to scratching, which in turn leads to more itching. It’s thought that scratching makes eczema itch worse because it releases inflammatory mediators which leads to the development of more eczema and more dry skin.

The dry skin caused by eczema stimulates the nerve endings in the skin, sending a message to the brain that it is itchy, and the brain will respond with a behaviour which is often scratching that itch.

These strategies work for our family. Tell us what works for you on our Facebook page.

As well as sharing our experience of bringing up an eczema child (and favourite allergy-friendly recipes), ScratchSleeves also manufacture and sell our unique stay-on scratch mitts and PJs for itchy babies, toddlers and children. We now stock sizes from 0-adult in a range of colours. Visit our main website for more information.