Eczema is really itchy and almost impossible not to scratch. Every parent whose child suffers from eczema knows how distressing it can be to watch their youngster claw at their skin until it’s raw. Many little ones struggle to control their itching and can end up with painful broken skin, making the condition worse and increasing the chance of infection.

As a parent, it can be difficult to know what to do and how best to help your child handle the urge to itch. The discomfort of eczema is unpleasant in itself, but it can also lead to sleepless nights which make the impact worse.

Apart from the immediate damage caused by scratching, the scratching action can also turn into habit. To minimise the damage and stop this habit-forming, you will need to give your child some effective strategies for dealing with the very real eczema itch. From experience, being told to ‘stop scratching’ without being told how to stop scratching is incredibly frustrating; but learning how not to scratch is an important life skill for an eczema sufferer.

Why does eczema make you so itchy?

Roughly one in five children in the UK is affected by eczema, which makes the skin hot, dry and very itchy. The itch is generally known as the worst symptom of eczema as it is incessant and only gets worse when scratched.

Most eczema flare-ups are triggered by the ‘itch-scratch cycle’ which is when itching leads to scratching, which in turn leads to more itching. It’s thought that scratching makes eczema itch worse because it releases inflammatory mediators which leads to the development of more eczema and more dry skin.

The dry skin caused by eczema stimulates the nerve endings in the skin, sending a message to the brain that it is itchy, and the brain will respond with a behaviour which is often scratching that itch.

With eczema, prevention is better than cure

The most effective way to stop children scratching eczema is by minimising the itching with a good skin maintenance routine and avoiding known triggers. Keeping rooms cool, dressing itchy kids in loose cotton clothing and avoiding using harsh soaps and detergents on anything (and anyone) they come into contact with. When these measures haven’t worked, a cold compress (or an ice cube) can often be effective at stopping a localised itch – we keep a novelty gel-filled cold compress in the fridge for the purpose (which also comes in handy for bumps and bruises). Another method of avoiding scratching is to lightly tap or drum the itch with your fingers until it fades – the vibration created by the tapping interferes with the nerve signals responsible for the itch. On really itchy days (or nights), children’s Piriton can be helpful for some children, but it will make them drowsy. 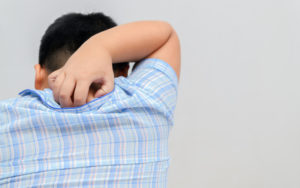 If the itch just won’t go away – distraction can be really effective, especially if it is really interesting or fun and involves both hands. Watch your child and work out if there is a time when they are more likely to scratch. This will often be when they are tired, slightly bored in the car, or pre-occupied watching the TV. Armed with this knowledge you should be able to come up with a strategy to help them. Fiddly toys like Lego, tangle toys and even a Rubik cube are great for keeping hands busy. We have found that Power Ranger action figures are great at keeping our son’s hands out of mischief while he watches the TV. On car journeys action songs can work well – and you don’t have to stick to the original words – when we sing ‘The Wheels on the Bus’ it has ducks (quack, quack, quack), crocodiles (snap, snap, snap) and all sorts of silly additions to keep the kids’ attention. We also have some great games on our mobile phones to keep scratchy fingers occupied when we are out and about.

Raise kid’s awareness of their scratching

If you have any great tips please let us know on our Facebook page or drop us an email so we can add to this list!

Here at ScratchSleeves, we don’t just share our experiences of bringing up an eczema child (and favourite allergy-friendly recipes), we also manufacture and sell our unique stay-on scratch mitts and PJs for itchy babies, toddlers and children. We now stock sizes from 0-16 years in a range of colours. Visit our main website for more information.