As the parent of an eczema child you know that all sorts of things can trigger a flare up. Toiletries, cleaning products, animal dander, washing powders…the list goes on and on. What, however, about the environment in your home? It is widely recognised that house dust mites can worsen eczema and other skin conditions, but there is another allergen lurking in your house that you might not even be aware of… mould. 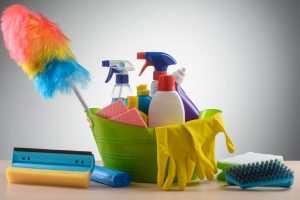 Bleach effectively removes household mould. You can also buy specific mould and mildew removers – but their main ingredient is bleach

Where does mould grow?

Mould is literally everywhere, including in our homes. Moulds release microscopic particles called spores in their thousands into the air around them,  and these spores can cause mild to severe allergic reactions. When they come into contact with skin and membranes they can result in rhinitis, itchy eyes, asthma and eczema.

Moulds flourish in damp conditions hence the wide range of different fungi we see growing on fallen logs and rotting vegetation. We are familiar with finding the furry black and white moulds on out of date food but you may not realise that excess moisture in buildings as a result of rising damp, leaking pipes or damaged windows and roofs can lead to mould in your home as well.

Even if your home is completely dry and damp proof there are other places that mould is likely lurking that you are unaware of. The refrigerator needs to be kept clean and dry, especially around the seal, or it is likely to harbour unwanted organisms. Window frames, wallpaper, houseplant soil, carpets and curtains all absorb condensation meaning in the winter they are ideal breeding grounds. In addition the warm damp atmosphere in bathrooms and around tumble driers are common problem areas.

How does mould affect eczema?

Mould can cause eczema to worsen when it settles on the skin as it can infection any open eczema lesions. Medical professionals believe that this can be a major contributing factor to discoid eczema or nummular dermatitis. This type of eczema, sometimes referred to as ringworm eczema, is a coin-shaped patch of dry, scaly skin which may or may not itch.

In addition, mould on the skin can alter the microbes growing there which potentially weakens its physical barrier. The mycotoxins released can trigger inflammation and damage the skin further. As such mould related eczema is typically characterised by reddening of the skin. Other common symptoms are an accompanying runny nose and watering eyes.

How can we avoid it?

To put it bluntly, we can’t. Everyone is exposed to moulds of some form in their daily life, be in in the home, at school or outside. The good news, however, is that we can minimise exposure to it by keeping it under control as much as possible.

There are simple measures we can take to reduce damp inside the house.

You can find further information on the subject of mould and eczema in this brilliant blog post by Laura Dolgy on It’s An Itchy Little World. Please click here.