We know from experience that having an eczema baby can be isolating and daunting. But you’re really not alone.  Although baby eczema is sadly common, it’s just not something that you see when you’re out and about because most parents avoid taking their eczema babies out when their skin is really sore.  We have found some lovely people to share their experience of baby eczema, hopefully these stories will help you find solutions that work for your family’s baby eczema.

This is the first in a series and is the heart-warming story of William and his mum Anna. Their journey through baby eczema and food allergies has inspired Anna to set up the brilliant website My Child’s Allergy, which collects great advice, recipes and product reviews for food allergic and eczema kids. 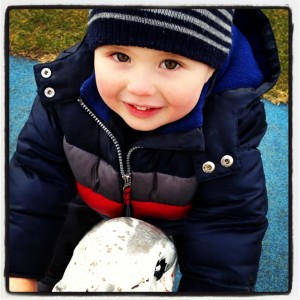 William will be 3 in July. Although he still has severe food allergies to dairy, egg and nuts his eczema has completely gone for the moment.

From birth William was a very sick baby, even hours after being fed. As the months went on he gradually became puffy and wheezy. We had a frightening trip to A+E early on when he had a breathing apnoea episode. I was constantly being recommended baby Gaviscon by different sources for reflux which I never gave. I just knew that in our particular case reflux was not the problem.

When I started weaning William, the eczema appeared. It started on his cheeks where it was worse and eventually spread to his whole body. He was sore and itchy, it was pretty unbearable for him and horrendous to watch, we felt so desperate. He was put on antibiotics twice as the eczema on his face was infected. We were back and forth to the doctors and had a bag full of steroid creams which we tried with no success. I probably spent £200 on potions and private appointments in an attempt to find something that worked. Eventually, when William was around 6 months we got a referral to the dermatology department of our local children’s hospital and he was admitted there and then. He was put on his third course of antibiotics and treated for three days with steroids, creams and wraps. His skin looked completely clear by the time we left but within a week I could see it coming back.

Through dermatology they suggested allergy testing and after the skin prick test he was positive for dairy, egg, soya, nuts, wheat, fish (we found out ourselves about lentils and split peas) – that was a pretty shocking moment and we had no idea what to do. I was breastfeeding so had to initially cut out dairy and egg from my diet. We were prescribed Neocate milk and although it was a big struggle to get him onto the bottle once we did there was a vast improvement and he loved it. I switched to Surcare

washing powder, cut down his baths, washed bedding at a high temperature, only dressed him in cotton and loose clothing. Those things along with cutting out all the foods he tested positive for along the way worked for him.

A friend heard about a cream and bath oil called Skin Salvation from Pure Potions* which worked like magic on his eczema. I really feel this helped beat the steroid cycle as well.  We were also recommended ScratchSleeves. These sleeves allowed his skin to heal and stopped him scratching and spreading any further infection. When my son’s skin was weeping the cotton fibres of scratch mitts or socks tended to stick to his face, irritate the skin and increase infection not to mention the fact they were so abrasive. William seemed to find them very comfortable in fact I think they became a comfort for him at night as he felt secure with them on! He slept so much better and had full movement with them so was able to wear throughout the day for playing

William will be 3 in July, he still has severe food allergies to dairy, egg and nuts but his eczema has completely gone for the moment. He has just come off the Neocate formula

supplement (per his doctor’s advice).

Tops Tips from an eczema mum

A big thank you to Anna for sharing this story with us. We wish both her and William all the best for the future.

* not to be confused with the equally good Skin Salveation range.

Here at ScratchSleeves, we don’t just share our experiences of bringing up an eczema child and favourite allergy-friendly recipes, we also manufacture and sell our unique stay-on scratch mitts and PJs for itchy babies, toddlers and children. We now stock sizes from 0-adult years in a range of colours. Visit www.ScratchSleeves.co.uk for more information.